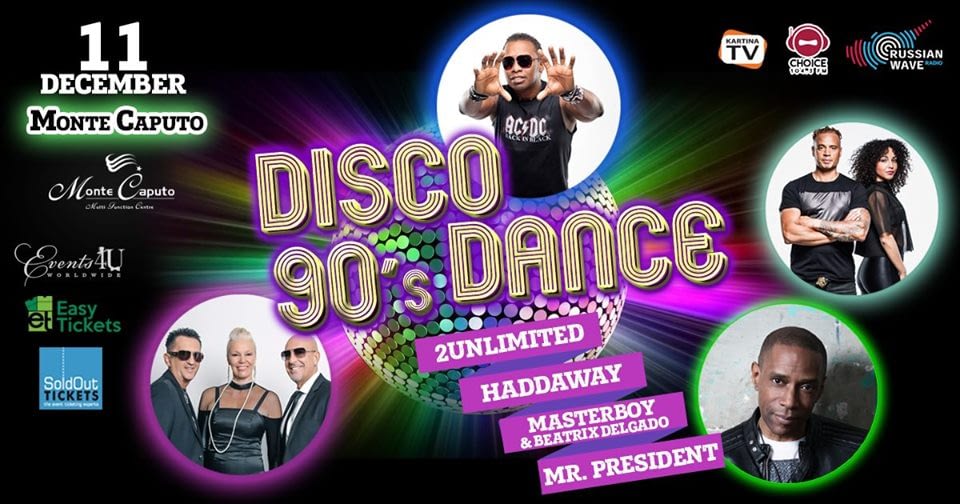 Hosted by Events 4U WorldWide

ITS TIME TO DANCE!!!

Significant Event of the year!!! For the first time in Limassol in a such a special combination DISCO DANCE 90`s!

HADDAWAY is a Trinidadian-German musician best known for his 1993 hit single “What Is Love”, which reached number 2 in Germany and the United Kingdom, and was certified Gold. By the beginning of 1994, worldwide sales of “What Is Love” had already reached 2.6 million. This was followed by the singles “Life”, “I Miss You” and “Rock My Heart” which were also top 10 smashes in Europe and established him as a successful Eurodance artist. After 25 years , Haddaway is in a great shape keeps partying every weekend all over the world and makes Thousands of fans Happy …

2 UNLIMITED is a techno legend, which celebrates 30 Years on stage next year … It is a dance act founded in Amsterdam in 1991. During the five years of their worldwide mainstream success the act sold more than 18 million records, scoring a total of 16 chart hits, including “Get Ready for This”, “Twilight Zone”, “No Limit” and “Tribal Dance”. Well known hits “Get ready for this” and “No Limit” made no 1 in USA and became anthems of SPORT Brakes game.

Masterboy is a German Eurodance group that formed in 1990. They are known for being one of the most representative groups of the 90’s “high energy” Eurodance phenomenon, at the time when this genre crossed over from dance clubs to the pop music arena. Popular songs by Masterboy include “Feel the Heat of the Night”, “Anybody”, “I Got to Give It Up”, “Generation of Love”, “Everybody Needs Somebody” and “Is This The Love”. Real Pioneers of EURO – DANCE, 145 BPM each song, made them popular all over Europe 3 Successful albums with 16 Hit, made them to be welcomed to all dance floor parties. They definitely bring us back great memories of the lovely 90 s ..

The super hit of this German trio “Coco Jamboo” for all who are over 30 has forever become a symbol of youth, summer and a carefree vacation. Under their incendiary compositions “I give you my heart” and “Up’n Away” we all danced at discos, lit noisily at parties. It is curious that MR in the name of the band is not “Mr.”, as was commonly believed, but an abbreviation of the words music and rhythm.

Children under 5 y.o. age accompanied by an adult, free of charge.