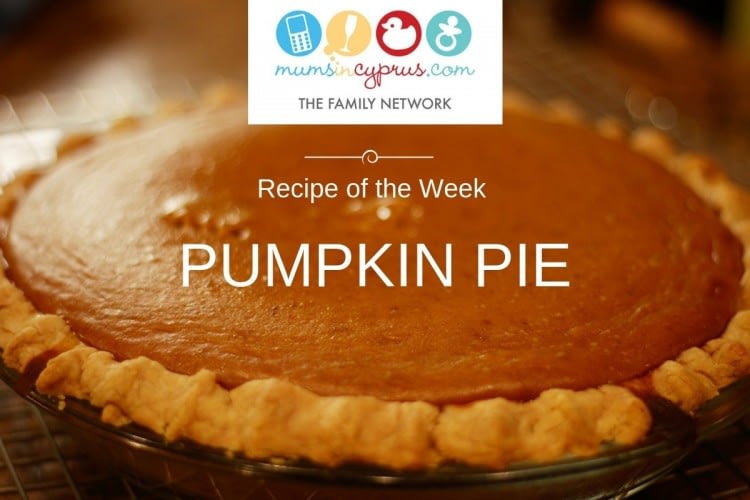 Kat’s less-sweet version of the American classic. Makes a great dessert for dinner parties and is nice eaten chilled in the following days after being made

This recipe may be a bit late considering that Halloween was a few week’s ago but not so late seeing that pumpkins are and will remain in season for months to come. Cypriot pumpkins are not the archetypal pumpkins that you may recognise from elsewhere in Europe or America – they are a massive, long pale-yellow gourd that you can buy whole or in pieces. Once cut, you will discover a wonderfully firm yet sweet orange flesh, with much fewer seeds than produced by round pumpkins. Uncut, they can last for weeks and they are a very economical ingredient to cook a wide range of foods ranging from soups, risottos, pies and pastries to side-dishes, breads and cakes. Pumpkin is also extremely versatile; you can roast, boil, sauté and steam it… you can mash it, puree it, chop it and stuff it. Try it several different ways and don’t discount it until you have. If you ask my husband whether he likes pumpkin, he would tell you that he hates yet. Yet pumpkin soup (pureed with leeks and cumin) and pumpkin pie are amongst his favourite dishes!

Pumpkin is nutrient dense and low in calories. It also makes a great weaning food for little ones with its mild, sweet flavour. Convince your older ones to eat it by telling them that all that beta carotene (200 percent of the RDA for Vitamin A) will help them see in the dark!

I’ve been making an adapted version of the River Cottage pumpkin pie for years. It’s a much healthier and less sweet version of the American classic pumpkin pie. To achieve a good pastry crust the best thing to use is a mix of lard and butter – this will give you that crispy yet flaky short-crust pastry common in British cooking. Some supermarkets here sell lard but if you can’t find it or don’t want to use it, just make your crust with just butter. I don’t recommend using margarine or vegetable shortening – they’re overly processed and just not good for you.

This recipe may seem fussy but with a bit pf preparation it is very easy. The pie crust can be made ahead and kept in the fridge up to a day before making. If you’re cooking pumpkin or sweet potatoes (baking, roasting or steaming) to use in another dish (baked potatoes, roasted pumpkins or steamed pumpkin for bread/muffins for example) then the filling for this pie is simple to make.

Sift flour and salt in to a bowl.

Put the cold butter/lard cubes in to the flour and rub it in with your fingers until the mix resembles fine breadcrumbs. Tip – try to make sure that the butter/lard is as cold as possible, as well as your hands, otherwise it will melt and you will make the pastry greasy and too elastic.

Add the beaten egg and bring the dough together in to a ball. Do not overwork it. Wrap it and place in the fridge for at least 30 minutes.

While your dough is chilling in the fridge, you can make the pie filling.

Cool the steamed flesh and then liquidise/puree until smooth

Add in the other ingredients and beat them in to the pureed pumpkin with a whisk.

Roll out your pastry on a lightly floured board and place in to your greased pie dish. Cut off the excess, leaving a little overhanging pastry that you can pinch around the edges. Prick the bottom of the pastry with a fork and bake blind (without the filling) for 15 minutes (or until just firm to touch).

(You may have a little extra pastry left. Put some low-sugar jam/fruit in it if you like and roll it up in to a long tube – makes a tasty treat for the kids – baked and sliced).

Once you have partially cooked the pie crust a little, pour in the pumpkin pie filling and put back in to the oven for 45 – 50 minutes. If the crust is burning towards the end, cover the top lightly with some foil/baking paper.

This is equally nice served warm, or cold for up to a few days after, served in slices with cream. Enjoy!

Roasted pumpkin makes this recipe even better. You can also use steamed/roasted sweet potatoes when pumpkin is out of season