Specialises in prenatal and neonatal screening programs across Cyprus

With its headquarters in Limassol and screening branches in all other towns, the Center is committed to the field of preventive paediatrics through specializing in prenatal and neonatal screening programs, which are all offered free of charge to the public.

END_OF_DOCUMENT_TOKEN_TO_BE_REPLACED 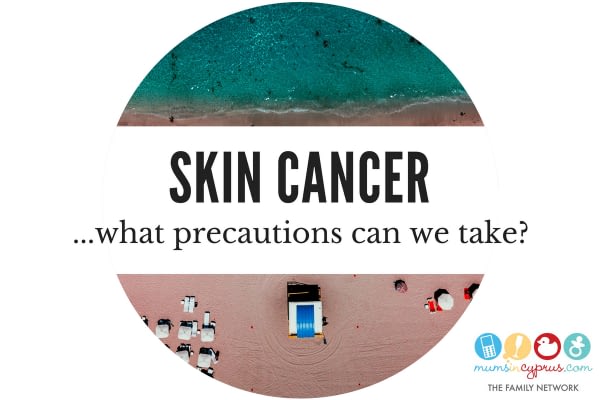 Summer is here and so is the sun. Here to stay, way up high in the sky, all day, every day, for the next six months (at least in Cyprus :-). This translates into a LOT of harmful rays, and we need to take appropriate measures to stay healthy and not burn our skin.

In our quest to always bring you relevant, up to date advice and information, we scoured the web for the latest expert recommendations and found out that, sadly, Europe has a skin cancer problem.

Did you know that skin cancer is the most common cancer?

It doesn’t need to be a growing problem. Skin cancer can be treated if caught early.

Seek shade where possible, and avoid the summer sun during the middle of the day.

Include dark colours, long sleeves, a wide-brimmed hat and UV-rated sunglasses. For children, look for clothing with inbuilt sun protection.

Check that yours has a high protection factor against both UVA and UVB rays. Remember that sunscreen takes effect around half an hour after its application and only lasts for two to three hours.

Children are at the greatest risk of long-term health issues related to unsafe sun exposure.

Outside play is important, but you should never let a child get sunburnt.

WHO IS AT RISK OF SKIN CANCER?

Skin cancer can affect anybody at any age.
It is most common in people over 50, or people who have had prolonged exposure to the sun.

You are at higher risk if you:

Whether you’re in a high-risk group or not, there are simple things you can do now to protect you and your family from skin cancer.

By knowing the signs, and checking yourself regularly, you can stop any suspicious skin lesions before they become something more serious.

WHAT TO LOOK FOR

Check your skin for spots that:

WHAT TO DO NEXT

Skin cancer can be treated, and early diagnosis makes the chances of a full recovery very high.

If you spot a suspicious lesion, it is vital that you have it checked by a doctor or preferably a dermatologist as soon as possible. Where treatment is delayed, the condition worsens, and in some instances, can lead to disfigurement, complications and even death. Don’t let delay reduce your chances of a positive outcome.

The golden rules are:

Skin cancer is treatable if it’s caught early.
If you have a spot that looks suspicious, go and see your doctor.

Check the following pages for more details on skin cancer and how you can gain knowledge that will help you stay safe:

For more information about skin cancer, and how to prevent and detect it, visit www.euromelanoma.org.

Article available in its original form on the Euromelanoma.org webpage.

Women in the UK are more likely to consider changing their diet than visiting their GP when confronted with bloating, a major symptom of ovarian cancer.

New research from Target Ovarian Cancer shows that, when faced with the prospect of persistent bloating, women may unknowingly put themselves at risk by opting to do things like eat more probiotic yoghurts or cut out gluten, rather than visiting their GP.

Half (50 per cent) of UK women said they would do something with their diet, whereas one in three (34 per cent) said they would see a doctor if they were concerned about bloating.1 Previous research by Target Ovarian Cancer has shown that just 1 in 5 women can name persistent bloating as a symptom of ovarian cancer – an alarmingly low rate of awareness.2

Target Ovarian Cancer’s research also showed that women over 55 – who are most likely to develop ovarian cancer – are least likely to google their symptoms, leaving them at risk of a delayed diagnosis. Just one in three women over 55 (34 per cent) would do this, compared to almost two thirds of 18-24 year olds (64 per cent).4

Raising awareness is the first critical step, ensuring women know the potential significance of continued bloating and seek medical advice. This awareness gap means that women are not visiting their GP promptly, not being sent for the correct ovarian cancer tests quickly, and risk missing out on a crucial early diagnosis.

Annwen Jones, Chief Executive of Target Ovarian Cancer, said: “A probiotic yoghurt should not be preventing a woman from visiting the GP promptly if something is worrying her. Women should not be risking their lives because of the enduring awareness gap around the symptoms of ovarian cancer. If women know ovarian cancer symptoms such as persistent bloating and are able to link them to ovarian cancer early on, lives will be saved.”

Laura Everley, 38, from Crawley, was diagnosed with ovarian cancer in 2014. She said: “Before I was diagnosed I was experiencing all of the symptoms of ovarian cancer, including bloating. I thought that maybe I might have irritable bowel syndrome because there are similar symptoms. I’d even tried going gluten free, but it had made no difference. The idea of cancer hadn’t even entered my head. You just never dream this is going to happen to you.”

11 women die every day from ovarian cancer, and ovarian cancer faces chronic underfunding compared with other cancers. Together we can transform the lives of women with ovarian cancer. Join our TAKE OVAR campaign to raise awareness, fund research and save lives. Target Ovarian Cancer will hold an inquiry into diagnosing ovarian cancer sooner at the APPG on ovarian cancer in Parliament today.

Buy an over the counter medicine (eg antacids etc)

Make an appointment with my GP