about environmental dangers to the planet, especially the harm done through excessive use of plastic. They hope to encourage residents, as well as visitors to the island, to adopt a more eco-friendly lifestyle by going green.

Making a country “green” is a long and arduous process.

To make a big impact, Let’s Make Cyprus Green needs an army of passionate, like-minded people in order to help it along. By becoming a member for a small annual fee, you will help LMCG’s progress in reaching this goal.

Your membership fee supports the great work that LMCG carries out and as a ‘thank you’ for becoming a member, you will receive a t-shirt, a membership certificate and 10% off all products in their Eco Shop!

You can also choose to participate more actively in their organisation if you’d like to help out more by translating their material from English in to other languages to further spread their message; helping to organise their clean-up events; writing educational articles for their website and more!

You can become a LMCG member online through their website here. 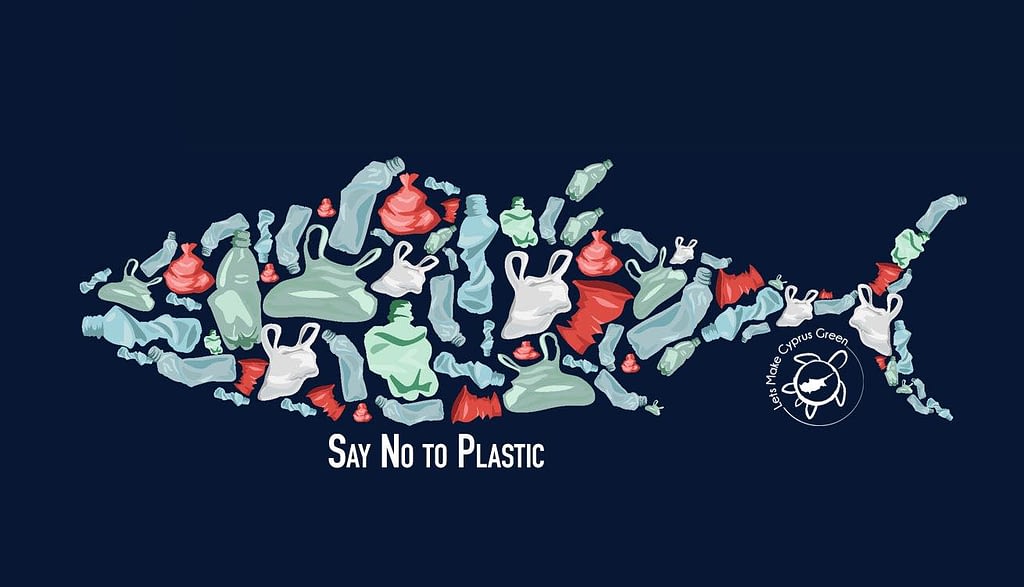 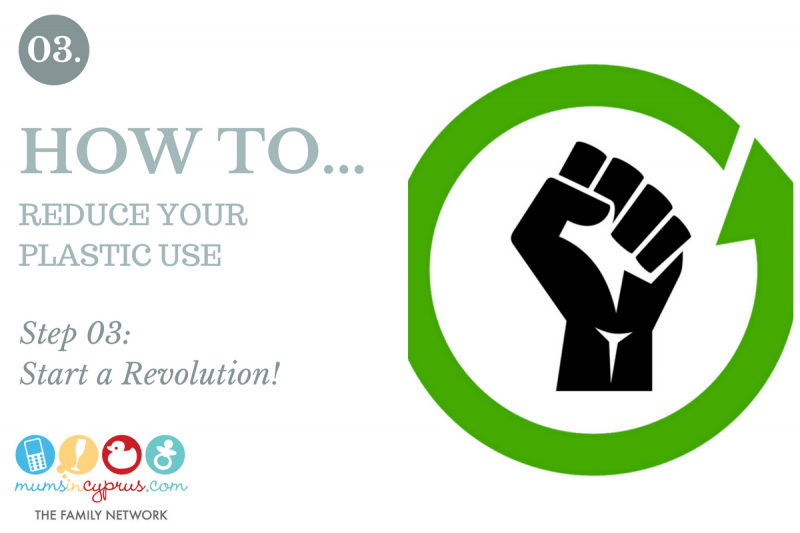 Continuing with our series on how to reduce our everyday plastic use, we wanted to introduce the idea of… Starting a Revolution!

We can pressure manufacturers and shops in to using less packaging by simply not buying foods and products with excessive packaging! Small movements around the world, like this one in Bristol, have started cropping up everywhere and people are taking a stand against excessive use of packaging in their local stores.

You could even consider organising your own “Plastic Attack” with your friends to demonstrate at your local shop to take more responsibility over how they package and sell their food:

What else can I do?

Next week, we’ll be choosing a plastic product that you can find an easy non-plastic or reusable alternative for…

Until then, think about how you can campaign for less packaging from shops that you buy from and online… We can vote with our feet and our wallets!

Let’s start a revolution and take back the control of what we buy and consume!

Please use these social media tags when sharing posts about reducing plastic use and help spread the word that change is needed.

It starts from home! 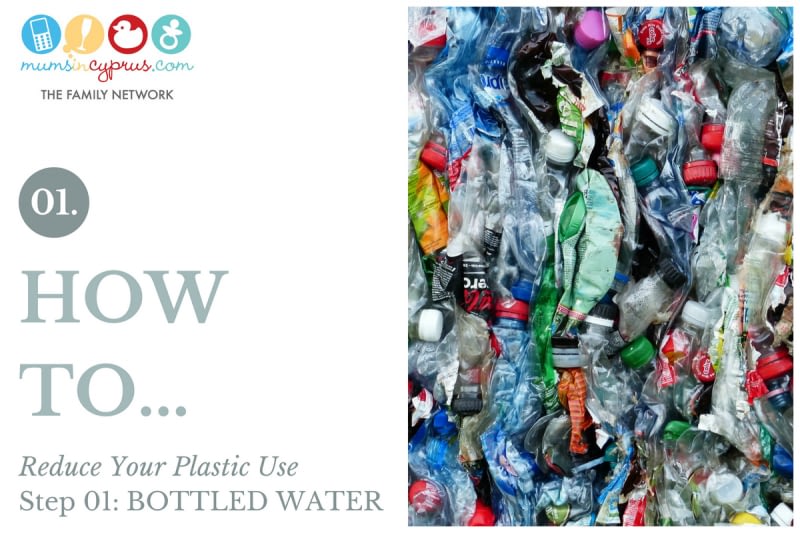 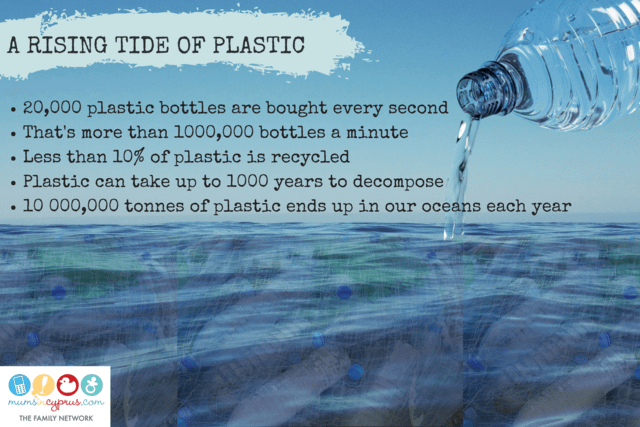 We are literally drowning in plastic!

Plastic bottles have been around since about the 1940s. A lot of the plastic produced since then still exists today; it takes hundreds of years for plastic to decompose – approximately 450 years for your average plastic water bottle. This means that the plastic water bottle you threw in the rubbish today will still be on this earth in the year 2468! Considering that no more than 10% of plastic produced annually is recycled – that is A LOT of plastic sticking around this planet, leaking its toxicity in to our groundwater and oceans for an extremely long time.

Plastic and the world’s animals

Sinking plastics entangle marine creatures; plastic bags are mistaken for jellyfish by turtles and are ingested; smaller bits of plastic are ingested by marine creatures that die from starvation because their stomachs are filled by plastic, leaving no room for real food. We are only just starting to comprehend the toxicity of plastic in our oceans and how it is poisoning and killing creatures all over the globe.

Plastics break down in to micro-plastics very quickly, even though it takes far longer for them to decompose entirely and these are eaten by sea creatures. This chemical load accumulates and concentrates the higher up the food chain we go: over two thirds of edible seafood and a third of fish that are served at our tables, contain plastic.

Since the recent release of David Attenborough’s Blue Planet II, which highlighted the damaging impact that single-use plastic is having on the world’s oceans – including a case of a pilot whale calf which is thought to have died after consuming its mother’s milk contaminated with toxic chemicals from plastic – there has been an unprecedented swell of public concern. If we don’t do something about this soon, it is thought that there will be more plastic than fish in our oceans within 50 years’ time.

Plastic bottles and our money

The costs of producing plastics (oil, water and energy), the greenhouse emissions from the manufacture processes, as well as the transportation costs of bottled water are a hefty price to pay for something that is mostly used once and then discarded.

As for the cost to the consumer, bottled water adds up to quite considerable amounts over the course of one year. While the cost of bottled water is generally lower in Cyprus than other European countries, at a population level we tend to consume much larger amounts of bottled water per capita (hot, hot, hot summer ahead!).

Looking at the cost of bottled water consumption for an average family in Cyprus at a very conservative estimate, as a family you could get through 4 x 6packs of 1.5L water bottles a week: that would cost you approximately €500 a year (1248 bottles a year to be recycled/end up in a landfill)

That’s not including the single-use bottles you may buy at school, work or while out and about, and it does not include the bottled water you may use for other drinks (tea, coffee etc) and for cooking.

Plastic and our family’s health

Most people assume that because bottled water carries a price tag that it is safer and purer than tap water, but there have been a number of studies that have shown that bottled water can carry more contaminants than regular tap water.

A recent study in Canada found bacteria levels that exceeded the recommended safe limits in 70% of the water bottles they tested.  In fact, the standards for tap water are more strictly controlled than that for bottled water: it is checked daily in terms of quality and contains all the minerals necessary for the human body. However, understandably, we also tend to have many concerns about the purity of tap water. To read more about this, go to our How To guide – ensure the water you are drinking is safe – here.

Another recent US study examining bottled water samples from nine different countries found that nearly all of them had microplastics (little bits of plastic) present in the water. We’re consuming this on a daily basis!

While there is still a lot of research to be undertaken in this area, there are huge concerns about the harmful effects upon us, the environment and wildlife from bisphenol A (BPA), bisphenol S (BPS), bisphenol F (BPF) and Phthalates present in plastic bottles and plastic packaging.

One of the most widely cited claims is that high levels of BPA lead to low birth weight in babies. The World Health Organisation has stated that there is insufficient evidence as yet linking plastic use to cancer but with a material that is used in every area of our home and wider environment, present in (made from, containing or packaged within) almost every product and consumables that we buy, further research is definitely warranted.

What kind of plastics are we using? 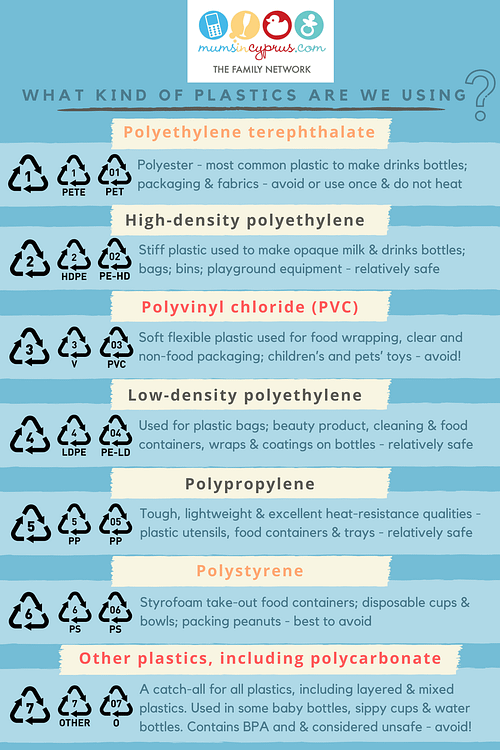 Experts recommend choosing plastic bottles with recycling code (2) when buying bottled water, because they’re probably the safest (and thus, contain the cleanest water) you can find on the bottled water market.

The next best bottles to use are those with the recycling codes (4) and (5) made from polyethylene and polypropylene – recommended as safe for limited use.

If you would like to be more careful, you should avoid drinks bottles that have the recycling codes (3) and (7). PVC (3) and polycarbonate (7) are the least safe of all plastics. (1) and (6) should also be avoided if possible.

It’s all quite complicated, isn’t it? Because you’ll also need to check that “BPA-free” water bottles made from number 5 do not have polycarbonate linings or mouthpieces.

The good news is that clear/opaque plastic is generally considered safer than coloured plastics, that may leach colouring agents in to your food and drink. And most bottled water we can find here in Cyprus comes in clear bottles.

Drink tap water! It’s by far the safest and most affordable water.

To ensure the water quality you are drinking at home is the very best and safest it can be, the installation of a water filter in your home would be the best option.

Not only will you be cutting down substantially on your plastic use, you will also be saving money. We saw further up in our article that the average consumption cost of bottled water was around €500, remember? Well, the cost of an average water filter in your home works out considerably cheaper over a three-year period, even when you include the cost of installation, maintenance and replacement filters.

If you choose a reliable and affordable solution, like these Doulton Ceramic Countertop Filters from Karma WaterShops, you’ll find that you’ll be cutting your water costs by an even larger amount! 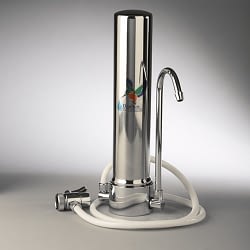 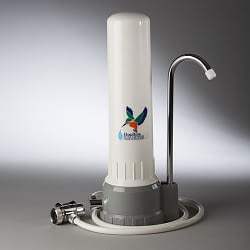 Say NO to plastic bottles when outside your home

For when you’re outside your home, another safe, economic and environmental option is to get reusable water bottles (preferably glass or stainless steel), which, with proper care can last for years.

In addition to their range of filter systems, Karma WaterShops also stock a large selection of the well-known brand SIGG for the entire family.

Refuse to have plastic water in cafes and restaurants – ask for glass bottles or, if you know and trust the establishment, ask to be served filtered tap water.

Reduce, Refuse, Reuse, Recycle and Repurpose. Be the change!

You can help to save the environment by keeping wasted plastics out of the landfills, air, and oceans as well as cut down on natural resource use to make new plastics.

We’ll be offering further solutions in future articles in our step-by-step How To guides to reducing your plastic use.

One encouraging news item is that China has announced that it will be banning foreign imports of plastic for reprocessing (most of our plastic waste burden is currently shipped off to various countries to be recycled for us – leaving them to deal with our problem). This, and the huge sway in public opinion since the release of Blue Planet II has forced our leaders to start taking notice. The European Commission has recently launched a strategy to take effect in 2030 that will make all plastic packaging reusable or recyclable and will ban single use plastic (such as plastic coffee cups) across Europe.

But before we finish, here are some tips on how to get creative at home with plastic.

For those old plastic bottles that you have lying around the house, you can always find a way to reuse or repurpose them: 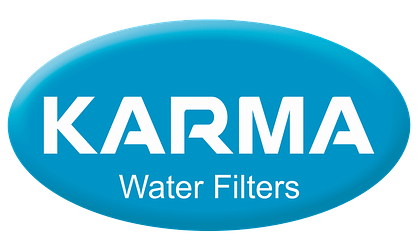 This article was sponsored by Karma Water. It is through collaborations such as this with locally selected and trusted partners that enable Mums in Cyprus to continue to bring you the very best information and support that we can provide.

If you would like to make a start on reducing your plastic bottle use at home, you can enter our #WednesdayWin competition prize draw to win a Doulton Ceramic Countertop Filter from Karma WaterShops for yourself. Winners will be drawn on Wednesday June 13, 2018: 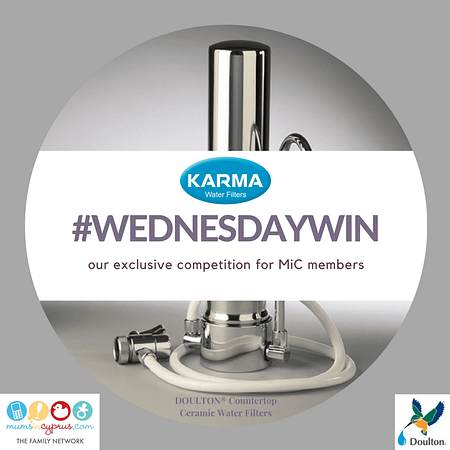 Use these social media tags when sharing posts about reducing plastic use and help spread the word that change is needed. It starts from home: