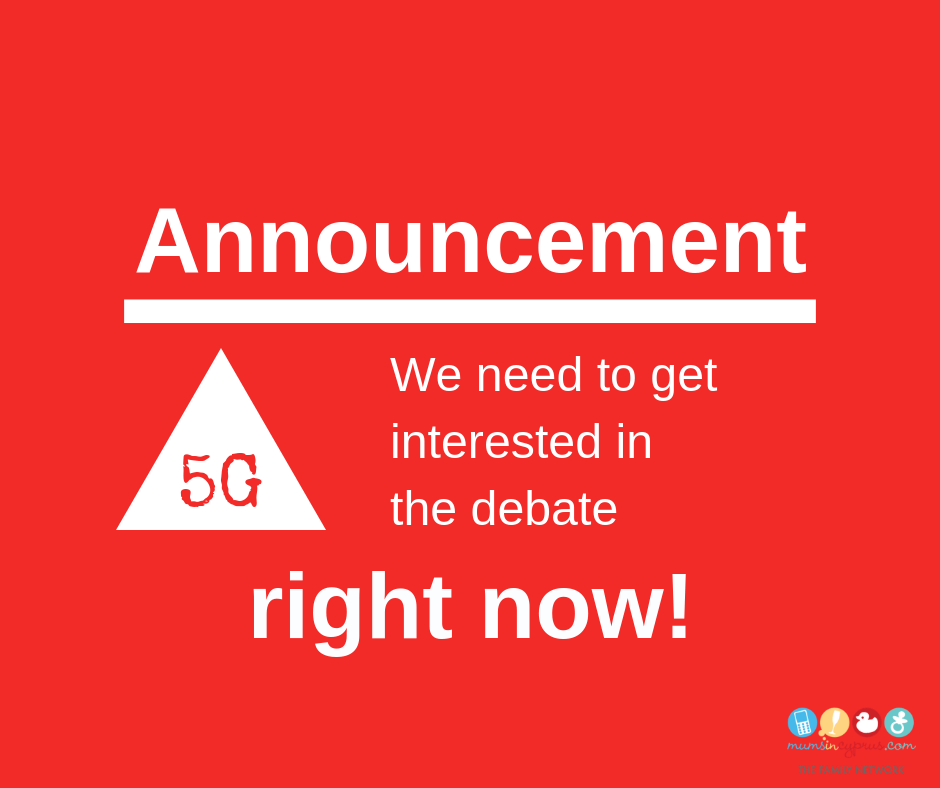 To those of you who believe that climate change is real, and who have read my recent posts about the need to get off our couches and take to the streets, to stand up and speak up.

To those of you who support that ‘we only live once’ doesn’t mean we shouldn’t care what happens after we’re gone, and who, as a consequence, treat Mother Earth with respect.

To those of you who are taking simple steps to reduce your daily use of plastic in your household, and who actively care about our environment and contribute to making Cyprus clean.

To those of you who are mindful about what you eat and drink, about how you live your life, and who try to avoid any lifestyle choices that may cause you or your loved ones cancer.

To those of you who have children and want to see them grow into healthy, strong, mentally fit, able-bodied adults, with successful, happy lives and wholesome children of their own.

We thought global warming was an urgent problem. We thought having just 11 years left to save our planet from irreparable damage caused by the effects of climate change was a short time. It now appears that 11 years is a very long time after all. That’s if we even make it to 2030 as healthy people, because…’move over, Climate Change…there is a new threat in town!’

A far greater and highly urgent emergency is unfolding right in our midst and we don’t even know about it.  Because we cannot see it the way we can see plastic pollution all around us. Because we cannot feel it the way we can feel the air pollution all around us. This pollution is different, and we do not have 11 years to save our bodies from the irreparable damage caused by it. 5G is already here.

The International Appeal to Stop 5G on Earth and in Space reports that:

‘in 2015, 215 scientists from 41 countries communicated their alarm to the United Nations (UN) and World Health Organization (WHO). They stated that “numerous recent scientific publications have shown that EMF [electromagnetic fields] affects living organisms at levels well below most international and national guidelines”. More than 10,000 peer-reviewed scientific studies demonstrate harm to human health from RF radiation. Effects include:

Forgive my ‘the-end-of-the-world-is-near’ kind of tone, but those of you who know me personally will confirm that I am as far from being a scaremonger as can be. I am, however, genuinely concerned about the effects that the radio frequency (RF) emission from the 5G network will have on our health.

The city of Brussels, the XII Municipality of Rome, Mill Valley in California, Geneva, Jura and Vaud – three cantons in Switzerland – have halted the network’s rollout until further and solid proof of its safety is established from a non-industry source. The Prime Minister of Poland has signed the global appeal to stop 5G. Those news alone should get us worried.

But let’s start at the beginning.

5G is the next generation of wireless technology, only that it is not simply an upgrade from the current 4G used by our phones. A stronger transmission technology is needed to power Augmented Reality (AR) Artificial Intelligence (AI), Virtual Reality (VR) and the Internet of Things (IoT) to make our cities smarter beyond just our phones, TVs and fridges.

This technology emits waves in higher frequency bands than ever used before in a commercial context and in our daily lives. The increased signal capacity is gained from shorter wavelengths, which means their range is lower and therefore they are more easily blocked by physical objects, building walls and I guess, even our bodies.

To boost these signals, so that the devices that are searching for the network in order to download and upload data can reach them, more antennas will need to be added to our cities, countryside, rooftops and even to space. According to the International Appeal to Stop 5G on Earth and in Space we will have emissions from ‘millions of new 5G base stations on Earth and 20,000 new satellites in space’. As for devices they say that ‘200 billion transmitting objects, according to estimates, will be part of the Internet of Things by 2020, and one trillion objects a few years later.’

I am no expert, but that’s a lot of electromagnetic radiation.

Whenever I speak to my friends about the danger that 5G poses to humans, animals and the environment I hear ‘but why isn’t this in the news?’ and ‘but then why is it being allowed?’. At the risk of sounding like a conspiracy theorist I usually reply ‘that’s because it’s all about the money.’ And it’s BIG money.

According to long-time United Nations staff member Claire Edwards, whose summary of the worldwide developments in the 5G situation I found extremely informative and objective, ‘the 5G rollout of a 12 trillion dollar technology’  is being ‘promoted by one of the most profitable industries on the planet. She writes that the challenge of informing the broad public is twofold:

‘The name “5G” is deceptive, implying a simple upgrade from the current 4G or fourth generation wireless. [And many WiFi routers now display “5G” as a mode option, but it means “5GHz” in that context, not actual “5G” — an industry ploy to normalize the term’s acceptance through intentional obfuscation. -Ed.] ‘

Personal note from me: We have recently upgraded our home internet and indeed, we received such a WiFI router with ‘5G’. I researched the matter and found out that it did mean 5GHz, but it freaked me out at first!

Claire Edwards continues: ‘This ruse cleverly disguises the reality that 5G means densification, with each individual, visible antenna being replaced by thousands of tiny antennas menacing people, animals and nature from every nook and cranny on Earth and from 20,000 or more satellites with lethal, laser-like beams hitting their unwitting targets millions of times a day like silent bullets.

The second difficulty is the tight control of the media. Hardly a whisper of negativity about 5G penetrates the public sphere, while its claimed benefits are constantly touted in puff pieces in newspapers and in numerous promotional videos.

Yet in the space of only a year since we first heard about the impending catastrophe that is 5G, the message has spread virally through the alternative and social media.’

Here in Cyprus there are several groups of concerned citizens that have come together and have made it their mission to inform the local community of the threat 5G poses to us. I am very grateful to them, because they have opened my eyes to this topic. Still, I don’t want to link to time-specific events of awareness talks and other presentations here.

What I do want to achieve with this post though is to inspire you to be curious about 5G and please have a critical mind when you google it. Just because the mainstream media outlets have not reported on the dangers of this wireless, relentless, unescapable radiation that 5G represents, does not mean it isn’t real. Money talks. Governments will think long and hard before risking their place at the table of future technology.

A good place to start are these sites:

The International Appeal to Stop 5G on Earth and in Space

Locally here in Cyprus there are a couple of serious petitions to sign online, this being the main one hosted on Avaaz.

The petition below needs printing out, but it has more gravitas since an ID number is needed with each signature. 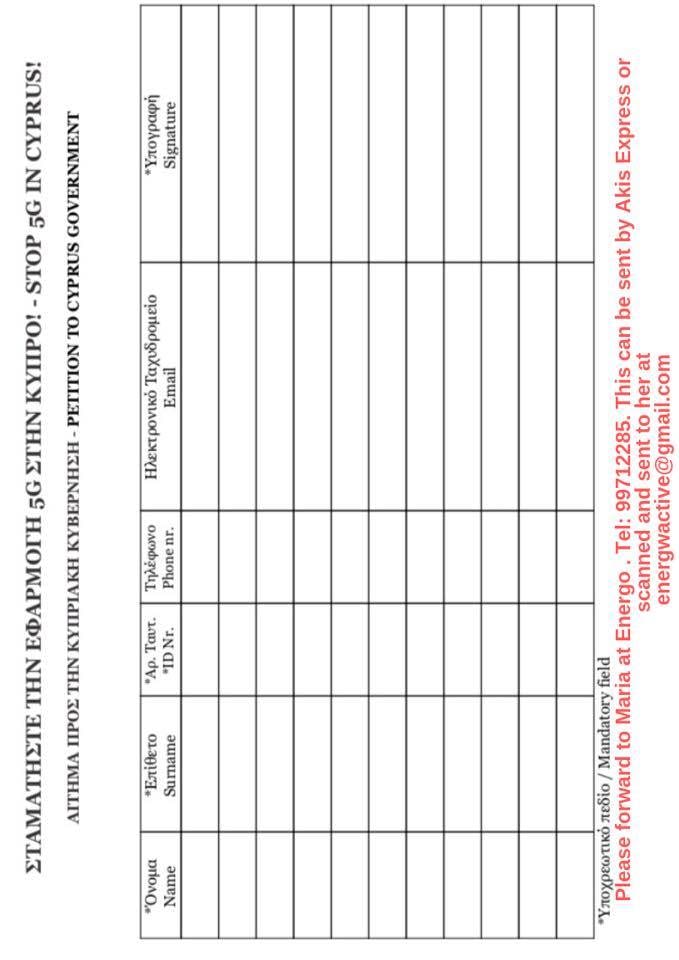 Seek out the truth…and thank you for reading until the end!